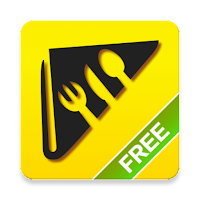 My third Android App in Google App Store. I spent approximately 1 week to finish this app, just doing it after working hour. So within like 2 months, I was able to publish 3 apps in total. Even though they are all simple apps but it does take some time to make them look good (at least to my standard).

"Tip Calculator" is what I wanted to create from the very start. I never like the job to split the bill at the end of a lunch gathering with friends / coworkers, coz it feels like I have to showoff my quick math skill that I don't necessarily possessed. It can be a bit stressful for me at times.

I don't like most of the tip calculator out there and I thought I can make a better version of it within a very short time. So this app is totally "Free" to download and there is No bloody Ads.

This is mainly for users in United States because tipping is a culture here. We never really tip back in Malaysia and I did embarrassed myself once in Japan. It was my first time in Japan and eating in a restaurant by myself. At the end, I left some tips and left. The waitress chased me down the road and gave me back my money thinking that I left it accidentally. Japanese are super honest and what a great country.

Anyway, tipping in the US... I don't necessarily agreed with paying tips based on the total bill after tax. Most of the suggested tip amount that you saw at the bottom of the bill are calculated based on the after Tax value. I know many people still do it as they think that the difference is so insignificant. I do it sometimes too depending on the amount. But like my friend "Dennis" always says: "5 dollar is 5 dollar...". There are times you need to be generous but not always.

So this app actually let you have the option to include / exclude the tax calculation. Like my previous apps, I translated them into English, Spanish and Mandarin. 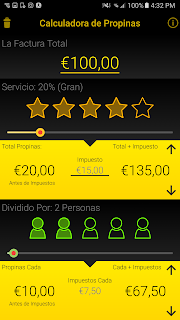 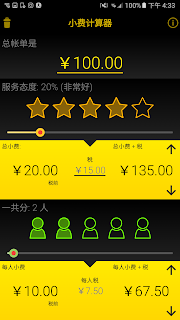 If you have the same problem like I did splitting the bills, try this app and I hope it will make it easier for you :). Please give this app some likes too.