This is the part that I was not very confident in doing. I don't have a wood working bone in my body. My unskilled hands refused to work with my mind. I suffered from blisters and cuts throughout this part of the project but I got through it eventually. Also, I don't have a workshop, so everything was done on the living room floor!

I bought my Arcade Cabinet kit from eBay. It was plywood and was pretty rough around the edges and relatively heavy. It was so far the cheapest that I saw for the size that I liked.

It required a lot of sanding. As I previously mentioned, the pre-drilled holes didn't fit the push buttons that I bought. I wasn't sure it was meant for a different size of buttons. I had to buy a hole-saw to enlarge the existing hole. It did burr the edges a bit but I was able to save the surface by using some wood filler. Also the side holes were too close to the Joystick Control Panel. It just didn't fit well and I had to give up the side buttons on the Arcade Cabinet. 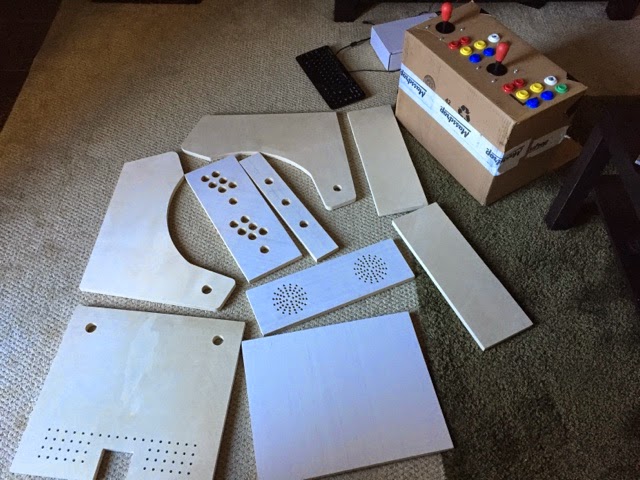 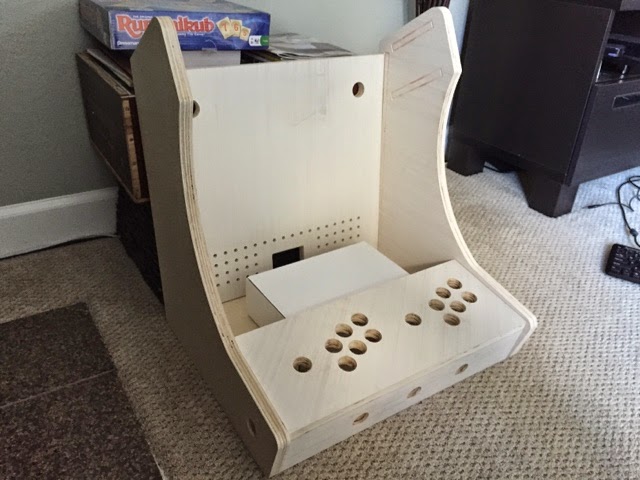 Assembly
It wasn't as bad as I thought... just need to measure things correctly and everything turned out pretty well. The wood filler really works well in filling up holes and dents. After that, more sanding.... 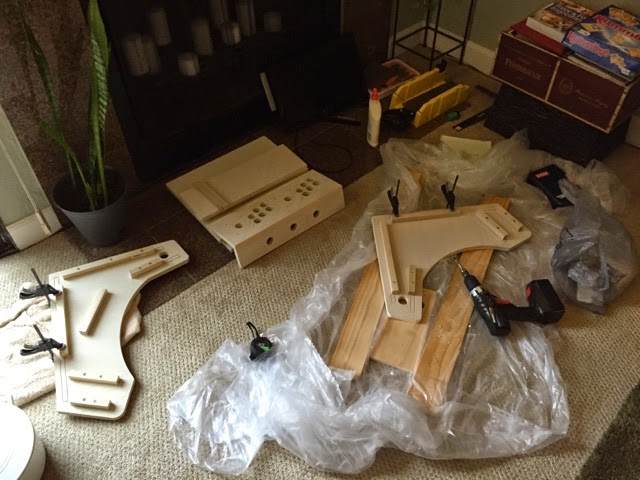 I used Veneer Edging to cover up the plywood edges. It was pretty straight forward. All I needed was to use a hot iron to iron it in. The hot iron melted the glue on the back of the veneer and stuck it to the plywood. It is not the perfect solution but was a cheap way to do it. I would have liked the colorful T-Molding plastic trim where it gives it a cool finish, but that would have required routing a groove, which was more tools and skill than I have! I trimmed off the excess Veneer Edging and then use more wood filler and more sanding. It looked great after that. 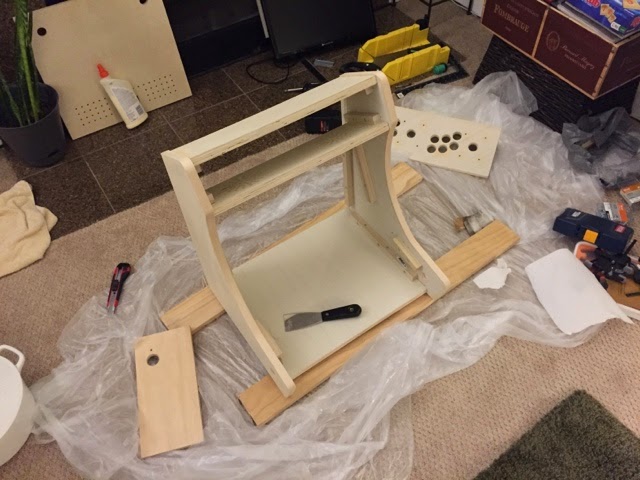 Painting: 2 layers of primer, followed by many layers of actual paint. It takes a while to dry. 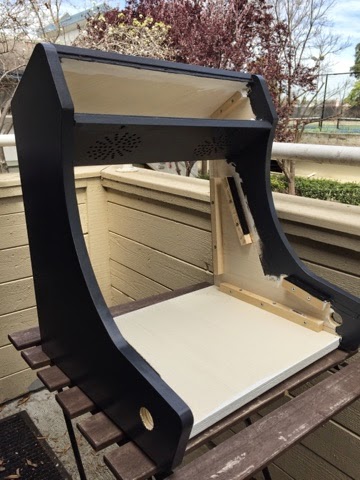 Posted by seangkuan at 11:00 PM No comments:

Refer to the RetroPie-Setup wiki for your installation after your first boot up.
This contains things like First Installation, configurations, how to get ROMs on the SD card and so on. Basically, this is all I used for my installation.

For my initial test, I just used my TV where I hook up my raspberry pi through HDMI port and keyboard. The first loading of RetroPie, you will need to configure the control. The Control is meant for navigation within the "EmulationStation". It is not meant for the game. Game Controller is configured differently.

RetroPie doesn't come with any games, you will need to find your own ROMs and load them into their specific directories and EmulationStation Console will automatically pick them up and display them.

Important!!! It is illegal to play game ROMs that you don't own physically. Don't ask me where to get game ROMs. Ask Google perhaps.

The day I configure my controls. 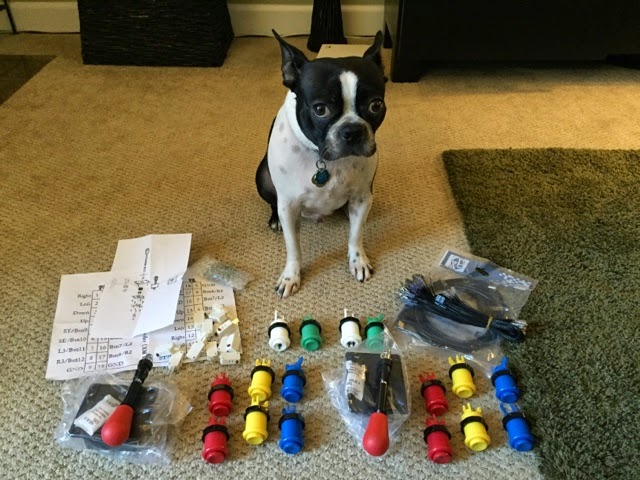 I was extremely excited when I got my push buttons and joystick delivered. It was a week night, I came back from work and started to work on it, I took the box that they delivered the package and turned it into my joystick console. 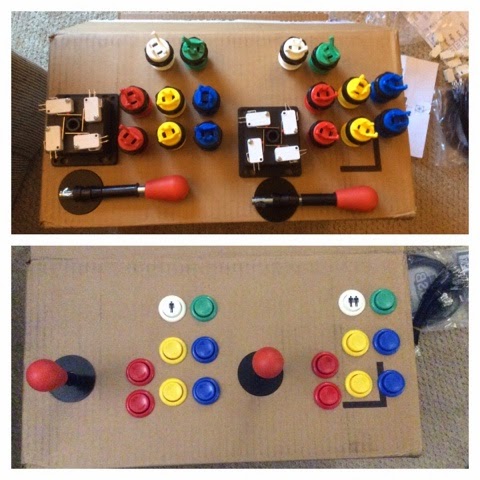 Everything was fine until I start hooking it up. It was frustrating!

tl;dr: Xin-Mo Dual Arcade Driver issue on Raspberry Pi. I read it some where (couldn't recall) that the issue is fixed permanently in the later kernel, so if you use the latest RetroPie, it should not have any problem. Please hook up all Players before you test. 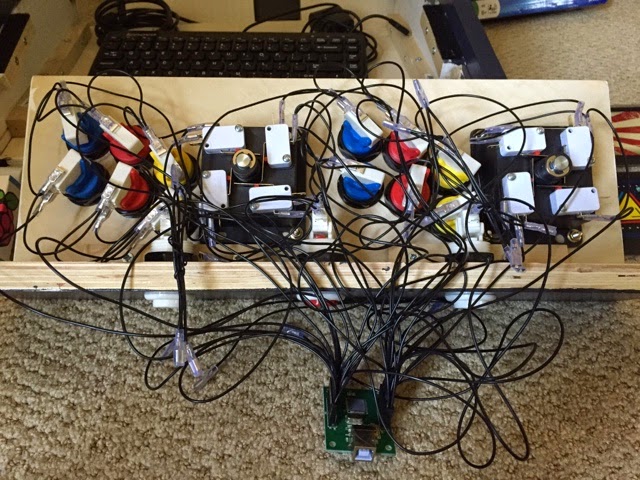 This is probably the part that drives me nuts. The package comes with the Xin-Mo dual player adapter (so I have 2 players controllers). Being a software engineer, I am used to working on a small portion and implement everything once I got it to work. So I thought it would be a good idea to just hook up 1 player first and get it to work before assembling the 2nd player. Mind you, the wiring of the controls & buttons are ugly. Once you got it connected, you need to figure out the ports that each button is wired up to (use evtest) and then edit the configuration file to map the keys to the buttons in the game. Nevermind, I finally figured out how to do it... I thought I got everything connected correctly but the joystick doesn't response to Right and Down. After much frustration, I went to bed.

The next day, I found this site where this guy had similar issue (doesn't response to Up and Left) using Xin-Mo Dual Arcade driver on Raspberry Pi. It was a bug with the driver. He got a fix to it where he wrote a driver as a patch to the Linux Kernel, GREAT! I had to try that. I went home that night, trying out the fix as described in his site. Raspberry Pi doesn't have a lot of resources, it took the whole night to recompile the kernel. I got up at 5am the next morning eager to find out if it worked. *$&%$#*#$(#! It didn't work!...

The next few days, I retried my installation, I retried the patch and tried alternatives that I could think of. I was exhausted trying to figure out this issue. The only thing I didn't try is to hook up the 2nd Player. Finally, I hooked up the 2nd player wanting to see if it has the same issue. Little did I know, this damn thing worked... not only did it work.. magically my 1st Player worked as well. Later, I did read that the patch to fix the Xin-Mo issue actually made it into the RetroPie version that I had used. I didn't need to do all that, I should have just hook up the 2nd players and I would have got it working earlier.

Anyway... Hooray! got it working.. I was enjoying the game. My friend Eileen stop by one day and we had a blast. 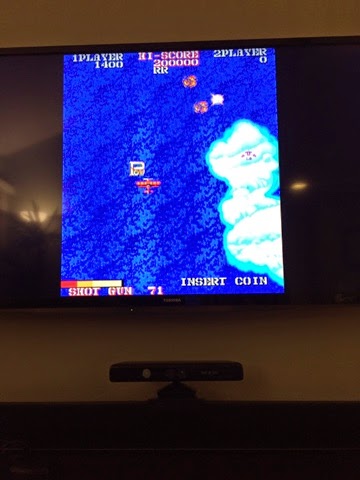 Posted by seangkuan at 11:01 PM No comments: 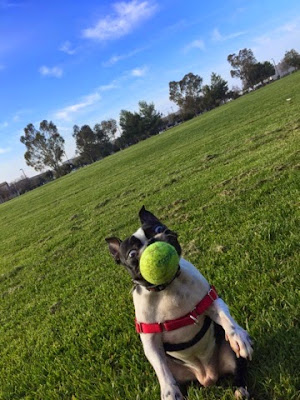 Bought my ingredients: (spent approximately $320)
I did not buy all these at the same time, I did it through a few phases.

Posted by seangkuan at 11:01 PM No comments: 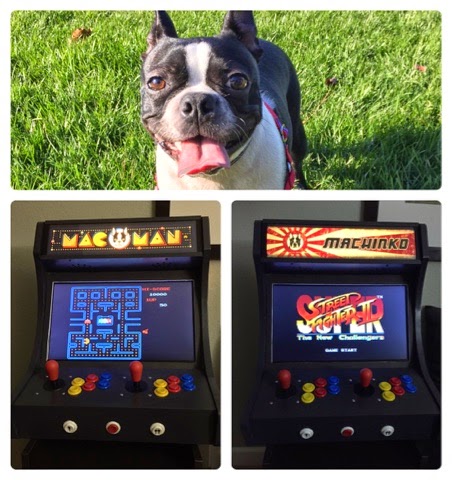 On 31st Dec 2014, I went to Sacramento, CA to celebrate new year with 2 friends (D & D). We went to a pretty divey bar where they are famous of making strong booze..... we thought it could give us a quick buzz before hitting the other bars.. Anyway... this is not a blog to talk about booze.

So as I was sitting down, I spotted the 2 Arcade Machines that they have at a corner. Don't remember what game it was. It instantly reminded me of my childhood where I was sneaking in the Arcade Game shop in my village with a few schoolmates. It was illegal for children under the age of 18 where I was from (Malaysia). The feeling of breaking the rules and afraid of getting caught or being seen by relatives and friends were both exciting and scary at the same time. Anyway... this is not a blog to talk about my childhood.

At this point, someone was playing the Arcade Machines, I was thinking how cool it would be to have one at home. That triggered me instantly to pull up my phone and search the internet to see if I can make this myself. The next day or two, I continued to do some reading about it and I concluded that it is not that difficult... I decided to make one myself using Raspberry Pi.

and many more... you can find lots of info out there.

Posted by seangkuan at 5:00 PM No comments: